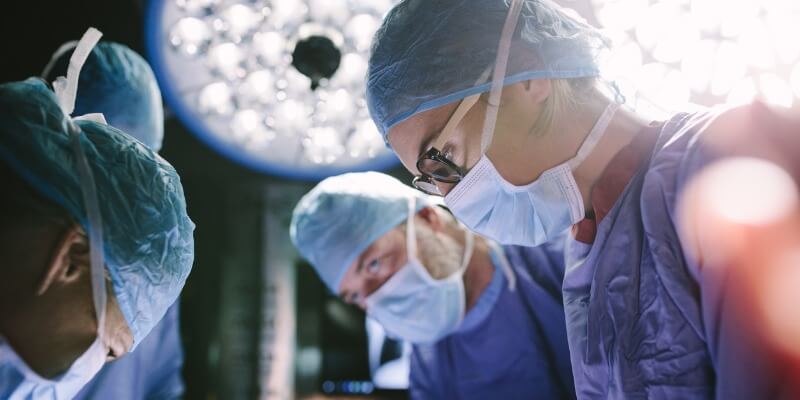 Dealing with medical issues is always difficult. There’s the discomfort that comes from being unable to do our usual activities, the uncertainty of not knowing whether things will get better if it’s a chronic issue, and the heartbreak that comes from watching a family member deal with an illness.

Things can get even scarier when the possibility of surgery is mentioned.

That said, there can be a bit of relief (even if it’s only a minute amount) knowing that a surgery has been performed so many times, it’s relatively safe. Granted, all surgeries come with risks, but rest assured, the most common surgeries have a high success rate.

The Top 10 Most Common Orthopedic Surgeries

In an attempt to give you peace of mind, we’ve listed the 10 most common orthopedic surgeries.

ACL stands for Anterior Cruciate Ligament, and it’s one of the major ligaments in your knee. It’s located diagonally in the front of your knees, and it provides stability when you rotate your legs.

During surgery, the surgeon will take a portion of a tendon from another part of your body and use it as a graft to replace the torn ACL. Patients can usually go home the same day of the surgery and follow the RICE home remedy method: Rest, Ice, Compression, and Elevation.

If you’re an athlete, be patient, since it can take up to a year before you’re able to get back to playing the sports you love.

Depending on the severity of the injury, a patient may need either a partial or total knee replacement surgery. Both are due to cartilage damage to the knee joints, which makes movement restricted and painful. This could be a result of trauma, bursitis due to repetitive movements, or obesity.

If the rotator cuff is also injured, the surgeon would perform a Reverse Shoulder Replacement: The metal ball is placed in the socket and the plastic prosthesis is placed on top of the humerus, held in place by screws and plates.

The thigh bone (femur) is connected to the hip bones (pelvis) by a ball-and-socket joint. The top portion of the femur is called the femoral head, and it’s the “ball” portion. The “socket” portion in the pelvis is called the acetabulum. When a person’s hips are healthy, everything fits together nicely, with cartilage making the joint move smoothly.

There are two different types of hip replacement surgery: Under the traditional approach, the entire ball and socket joint is replaced with either a metal or plastic prosthesis; while during the Birmingham Hip Resurfacing approach, only the damaged portions are replaced, making the surgery less invasive requiring less recovery time.

Arthroscopic surgery is minimally invasive. The surgeon makes a small incision and inserts a tiny camera attached to their instruments, allowing them to see what’s going on inside your knee joint. The images are projected on a screen, and your doctor uses the small instruments to correct the problem.

This type of surgery uses the same method described above for knee surgery, except that it’s done performed on your shoulder. The surgeon may need to make additional small incisions to repair the damaged portions of the joint.

Ankle repair surgery is necessary if the joint is unstable after a fracture. This means that the bones are not aligned properly. During surgery, the bones are repositioned to their appropriate position and held together with implants.

There are many different types of back surgeries: Spinal Fusion, Diskectomy, Kyphoplasty, and Laminectomy, are among several others. They’re all critical since the spine provides central support to the entire skeletal system. Fortunately, there are ways to perform many of these procedures with minimal invasion.

This type of surgery is common among arthritis patients. The damaged cartilage is removed during surgery and replaced with a graft. The bones making up the joint are then welded together to provide joint stability. It can be done in your spine, fingers, ankles, and feet.

Fingers have tendons that go from their base to the fingertips. These tendons allow people to move and bend their fingers and are covered by a protective sheath. If this sheath is injured, it becomes inflamed. This prevents the patient from being able to fully extend his or her finger. This is known as “trigger finger” or stenosing tenosynovitis. There are three types of surgery to correct trigger finger, and they all require only local anesthesia. The patient is also likely to be able to return home that same day.

At the Orthopedic Clinic, we want you to live your life in full motion. If you’re having serious orthopedic issues that haven’t improved with conservative treatment, we’d like to discuss options with you.