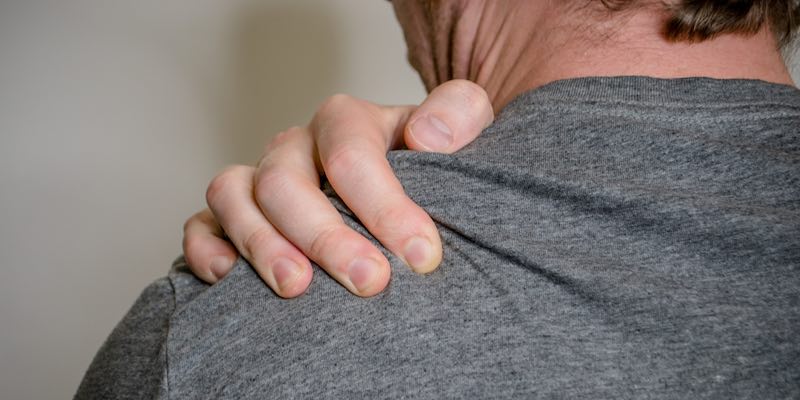 Are you experiencing shoulder pain? While sometimes it’s easy to pinpoint a specific event that caused an injury, other times, a person may wake up and suddenly realize that he or she is having difficulty moving their arm.

If the pain is subtle, it may be easy to take an Ibuprofen and push it out of mind, hoping it’ll go away on its own. But if it’s severe, it can significantly hinder attempts to perform activities of daily living. This can sometimes be the case with frozen shoulder.

What Is Frozen Shoulder?

Frozen shoulder (also known as adhesive capsulitis) is a condition that causes pain or stiffness of the shoulder joint. It occurs when scar tissue forms around the shoulder’s ball-and-socket joint, leaving less room for movement of the humerus (upper arm bone).

Joints have small sacs full of fluid (bursa) that help the joint glide smoothly. When a person has frozen shoulder, in addition to the scar tissue, the bursa tends to stick together, worsening the pain.

The symptoms can be gradual, starting with a slight stiffness. However, within a couple of months, the pain can increase, making all arm movements painful, including simple tasks like brushing teeth or changing clothes.

The pain tends to worsen at night, which can be exacerbated by sleeping on the injured shoulder.

The most common risk factors for frozen shoulder include:

Can frozen shoulder go away on its own?

Even though frozen shoulder usually heals on its own, home exercises can be done to relieve the pain. In addition, over-the-counter anti-inflammatory medication, physical therapy, or steroid injections may be prescribed.

On the rare occasions that conservative treatment doesn’t help the pain, arthroscopic surgery may be necessary to remove the scar tissue.

At the Orthopedic Clinic, we want you to live your life in full motion. If frozen shoulder is significantly affecting your daily life, let us help you get back to doing the things you love.